Berlin or Munich: Which Should You Visit?

Berlin and Munich are two of the largest and most important cities in Germany. But these two cities are very, very different, and choosing which one to visit can be a difficult decision to make.

Berlin is the capital, a city that has been at the forefront of events throughout the 20th century, and more often than not has come out on the wrong side of history.

This is a city that was destroyed in World War II, only to be divided for decades. It’s emerged from the ashes however, and modern Berlin is a compelling mixture of old and alternative.

Munich is the Bavarian capital, smaller than Berlin but not lacking in history. This is traditional Germany, and the city has more of a classic German look and atmosphere than you’ll find in Berlin. And, of course, Munich has Oktoberfest!

There are many great things to see and experience in both cities. To help you decide which to visit, we weigh up the pros and cons: Berlin or Munich? That’s the ultimate German travel question!

Berlin is one of the most fascinating cities in Europe, because the German capital always seems to find itself at the forefront of European events.

Berlin is the location of the German government, it’s where you can find the Berlin Wall that divided the city for decades, and it’s home to some of the most liberal and alternative neighbourhoods in the country.

When the wall was pulled down, just thirty years ago, Berlin began its evolution into the city you find today. At first, squatters moved into derelict buildings in the east, then they were joined by artists and creatives, and the city was soon reborn. Today you’ll find one of the most multicultural and diverse capitals in the world. Berlin is certainly one of the most interesting and lively cities to visit in Germany. 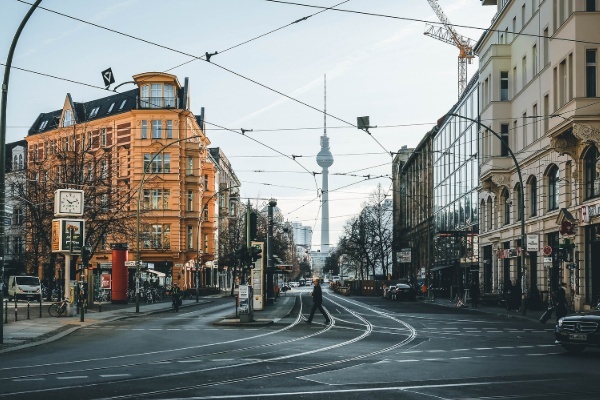 Munich is found far to the south of Berlin, and it could not be more different.

The Bavarian capital is equally as historic as Berlin, but it doesn’t have the same Cold War history and was never at the front line of events between East and West in the last few decades.

This is one of the most important cities in Germany. While it’s been quiet in recent years, the same can’t be said for the period encompassing World War II and the years leading up to the conflict.

But Munich mostly survived World War II, and whereas Berlin is gritty and alternative, Munich is easily the more aesthetic to look upon. It’s Baroque and Old World, and it’s beautiful. And that’s before you count all the incredible sights outside of the city, including stunning nature and Bavarian castles. 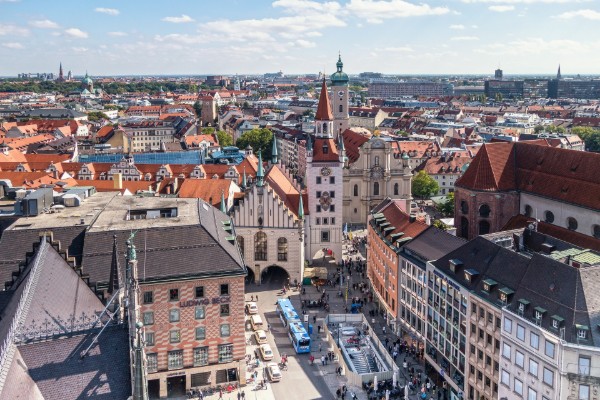 Berlin and Munich both have a huge amount of sights and tourist attractions to see. But both are quite different in what they offer.

Berlin was mostly destroyed in World War II. While the city centre has the Reichstag, Museum Island and the Brandenburg Gate to visit, away from these classic sights things get a bit darker.

The Memorial to the Murdered Jews is a dark look at the Holocaust, and it’s bound to be moving, while the remnants of the Berlin Wall and the Stasi, secret police museum, are an equally dark look at the tumultuous Cold War era when Berlin was divided between East and West.

There’s a lot of alternative sightseeing too. One of the best places to visit is the East Side Gallery where you can find beautiful artwork on remnants of the Berlin Wall. A good tip is to get the Berlin pass, which includes your travel around Berlin, whilst getting you into best museums and attractions for free.

Munich, on the other hand, has more of an array of historic architecture to offer, and the history in Bavaria isn’t quite so dark or intense as you might find in Berlin.

In the Old Town, you can stroll through the beautiful, Baroque streets of Munich, marvel at the magnificent Town Hall, wander through the delightful English gardens, and visit countless art museums.

A walk through Munich is like taking a step back to the 19th century or even earlier, and it’s an undeniably beautiful city, no matter the season.

Of course Munich has its darker side too, if that’s what you are interested in seeing. You can visit Dachau Concentration Camp on the outskirts of the city, which was the first such camp to be set up by the Nazis. There’s more too, but compared to Berlin, this side of history isn’t quite as visible.

Another positive for Munich is the surrounding Bavarian countryside, much of which is an idyllic, rural dream. The iconic Neuschwanstein Castle looks like it’s been taken out of the stills of a Disney movie, while the Linderhof Castle is not quite so dramatic but equally as compelling a historical sight.

Berlin will always take top place when it comes to nightlife, because this is a city that rarely sleeps.

Berlin has a huge alternative scene and for years, since the fall of the wall, that’s helped to fuel the city’s nightlife. Some of the biggest and best clubs in the world are found here, and any day of the week you’ll easily stumble across a party, even if you aren’t looking for one.

Munich, however, is slightly more refined, and the city isn’t quite as highly regarded by partygoers, except when it’s Oktoberfest.

Munich is more about casual drinks, nights out at the pub and, of course, drinking plenty of Bavarian beer while you indulge in traditional German dishes.

Costs can vary dramatically between Berlin and Munich. While Berlin is the capital, it’s Munich that has a higher standard of living and, with it, a higher cost of living. Much of this comes down to the East-West divide, because Munich developed while Berlin stagnated during the Cold War.

For tourists, this means that Munich costs more to visit, and you’ll find that hostels, hotels and Airbnbs cost more in Munich than they do in Berlin. The same goes for food and drink too. So if you’re on a budget or backpacking, then you’ll want to stick to Berlin, where your money will go much further.

That being said, while ten years ago the divide between Munich and Berlin was much wider in terms of the cost of living and living standards, the capital is very much starting to catch up.

Rent is increasing in Berlin, as are overall costs, although it’s still a cheaper city than Munich. In a few years time though, the divide might not really be that evident at all.

Berlin and Munich both have a huge range of restaurants and eateries, and being modern, diverse cities, you can find both German and international food in both.

Munich is known for its Bavarian classics and if you’re looking for real, authentic food – how you imagine German food to be – then this is the city to visit.

Of course, you can enjoy plenty of great beer alongside some enormous pretzels, but more than this, Munich does Bratwurst like nowhere else. That’s because the famous German sausage originated in Munich, and you’ll be able to order it with a full side of sauerkraut and mashed potatoes for even more deliciousness.

Berlin is the more multicultural of the two cities, and that’s demonstrated in its foodie scene. Berlin is known more for its doner kebabs and currywurst than it is for traditional German food or fine dining. You can find almost any cuisine in Berlin however, from Indian to Central Asian, so you’re never going to go hungry in the capital.

The weather doesn’t vary that much between Berlin and Munich throughout the year, but generally speaking, it’s Munich that does have the better climate.

Because it’s located further south, Munich has higher temperatures and summer tends to last longer than in Berlin. Winters are bitterly cold in both cities though, and you’ll need to wrap up warm by December. Munich sees thunderstorms in summer too, whereas Berlin will catch most of its rain in autumn.

Both cities have a lot to offer when it comes to festivals, but for most people, it’s always Munich that’s going to take the festival crown!

Bavarian traditions die hard in Munich, and the city has retained many of its unique and quirky cultural events, many of which date back centuries.

Of course, the best event of them all is Oktoberfest, and this huge three-week beer festival is a reason on its own to visit Munich. Many of the best Munich events take place in summer, but in winter, the city hosts classic German Christmas markets that attract visitors from across the world.

Berlin also has fantastic festivals, however they aren’t quite as long-standing or nearly as traditional as the festivals you will find in Munich.

Due to its iconic alternative scene, Berlin is best known for its music festivals, and all through the year you’ll find huge events on and around the city – although of course, summer is when things are really happening!

Being the capital, Berlin is a great place to be on historic occasions, and the city celebrates and remembers such occasions as German Reunification Day and other important dates in the calendar with public events.

Munich and Berlin are both incredibly cultural cities, but you’ll find the culture to be remarkably different.

Berlin is one of the most liberal and alternative cities in the world, and that’s reflected massively in its culture. Munich, in contrast, is in many ways more conservative and the culture here is much more traditional.

Neither culture is better of course; both are simply very different. Both cities have plenty of cultural events, shows and performances too, allowing you to learn more about each city.

Deciding which is better for you will come down to personal tastes and what sort of culture and sights you’re personally interested in.

How to Travel to Berlin AND Munich

Berlin and Munich aren’t the closest of cities. The distance between them is close to 600 kilometres.

Still, it’s not too far and if you have a week or longer then you can definitely see both cities and perhaps even enjoy a day trip or two as well.

If you’re driving, you can stop off along the way at different tourist attractions, particularly in Bavaria where you have many iconic sights such as Neuschwanstein Castle and others that are found in the countryside.

By car, on the fast Autobahn, you could drive from Berlin to Munich in six hours.

Of course, you can also fly or take public transport too. Bus travel is the cheapest option, but also the longest, with most routes taking eight hours. Train travel is much quicker, with the fast ICE trains taking between three and four hours. To get cheap train fares though, you need to book in advance.

We can’t decide! They are both so different and so unique, and your decision will depend on whether you want classic Bavaria or alternative Berlin!

How long do I need for each city?

You can see the highlights of both cities in a long weekend, but don’t forget just how much there is to see. You’ll only scratch the surface, although you’ll have a great time. Stay longer and you’ll be able to dig deeper and really immerse yourself in the cultures of Berlin and Munich.

Is it easy to travel between Berlin and Munich?

Yes, if you have time then you can easily see both. Check out our travel directions above.

These Are the Best Cities to Visit in Italy Wild Camping in Scotland: Best Places and Key Tips
Scroll to top